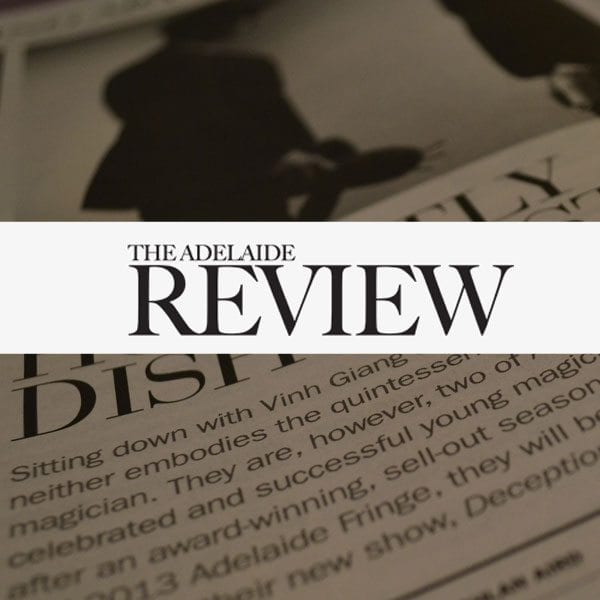 Sitting down with Vinh Giang and Matt Tarrant, neither embodies the quintessential image of a magician. They are, however, two of Adelaide’s most celebrated and successful young magicians, and after an award-winning, sell-out season at the 2012 and 2013 Adelaide Fringe, they will be returning in 2014 with their new show, Deception.

Forget top hats and capes, Giang wears Ralph Lauren casual business attire while Tarrant has a lip ring, tattoo and headphones resting on his neck. While both are from Adelaide, the duo met online and joined forces to perfect their chosen brand of magic — mentalism — a term they say is best described as “mind hacking”.

We’re more interested in what’s going on in between your two ears,” Giang explains.

Mentalism taps into a person’s intuitive behaviour, making them appear as if they have super-human knowledge about you and your thoughts.

Giang has fused his skills as a mentalist with that of professional motivational speaking; a unique combination that he says is like “making medicine taste good”. He most recently performed for a convention of prominent financial institutions in Hong Kong, and prior to this interview had received an inquiry to perform at a similar event in India. Conversely, when he isn’t performing magic gigs at functions, or spending hours researching magic or making connections with magicians worldwide (he can proudly claim David Copperfield’s executive producer, Chris Kenner, as a close friend) Tarrant is the online content manager for SBS’ Danger 5. With different experiences and interactions with magic, Tarrant explains that Deception will explore their own fascination with magic.

“When we see magic, we can sometimes figure out how it works if it’s sleight of hand or another simple trick. But then there are other types of magic where even magicians who have been performing magic for so many years go, ‘How is that even possible? Is it actually magic or is it something beyond that?’ In Deception we show some of the things that we’ve witnessed; future predictions, predicting the lottery, defy injury and death. And then it comes together in a final piece, which is this amazing routine of mind fucking everyone in the audience.”

Giang and Tarrant are at the forefront of magic in Adelaide for reasons other than their trickery. They consider the Adelaide magic scene as “stereotypical” and “unwelcoming” and are innovating ways in which to share and market magic to new generations of magicians. Along with two friends, Giang created the online community, Encyclopaedia of Magic, which encourages people of all levels to learn magic and share their skills, adapting from a passion project to an online business that saw the team awarded 2013 South Australian Entrepreneur of the Year. Tarrant spends hours online learning new abilities and forging relationships with international magicians to help improve his networks.

Furthermore, the two have an innovative approach towards marketing themselves, reaching out to their fans and supporters through the crowd-funding network Pozible in order to encourage audiences to help fund their show. With the goal for $10,000 achieved, it will allow for props, staging and production for Deception to be of the highest quality, as Tarrant explains.

“We don’t want [Deception] to feel like a Fringe show. At the Fringe you go to one show and then another one a couple of nights later and the venue looks the same. We want to take over the venue [in Gluttony] and have it as our own.”

More importantly, the campaign has helped market themselves to new and existing audiences – in the process selling tickets to the show before they officially even go on sale.

“A lot of people performing for the Fringe, they don’t worry about tickets until one or two weeks before the Fringe starts,” says Giang.

“This allowed us to sell tickets before FringeTix even opens.”

If it wasn’t already clear that Giang and Tarrant always seem to be one step ahead of the game, being told as the interview came to an end that I had been unknowingly participating in a magic trick the entire time certainly made it overt.

Giang explained that before we met he took a photo of a playing card on his iPhone, which had been sitting untouched on the table for the entire interview, and that while we were speaking he and Tarrant had been speaking to me in a way that would make me think of the card. Explaining that men usually select the Ace of Spades and women the Queen of Hearts, Giang gave me multiple chances to change my number. I finally settled for the Ace of Diamonds. Sure enough, when I opened the Photos App on his phone, the last photo taken was of the Ace of Diamonds.

My mind was deceived.